#7 – ‘Nativity with St Francis and St Lawrence’ by Caravaggio 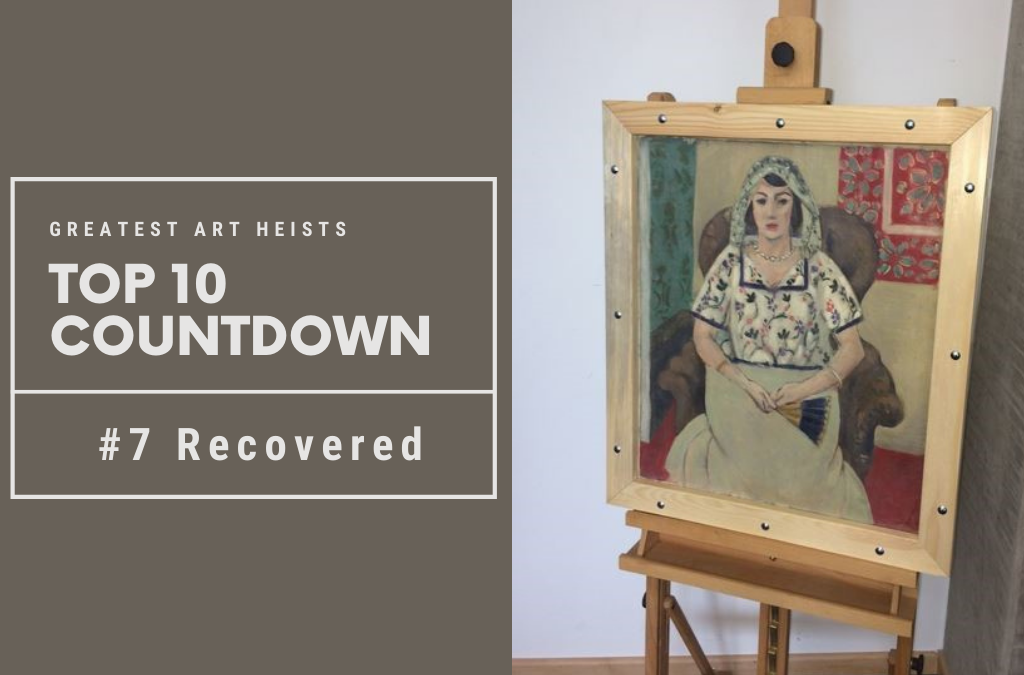 Paul Rosenberg, was a well-known French art dealer and collector who represented the likes of Pablo Picasso, Henri Matisse, and Georges Braque.  The Rosenbergs were Jewish and the family had to flee the Nazis in 1940, owing their lives to the Portuguese Consul-General in Bordeaux who issued them visas to Portugal.  They then travelled from Lisbon to New York where Paul opened a new gallery.  Although he had been gradually moving his collection out of Europe since the late 1930s fearing the rise of the Nazi party, more than 2,000 pieces had to be left behind.

The Rosenberg family has spent many years trying to recover those 2,000 artworks.  Many have been found, sometimes in sensational circumstances, such as 400 unearthed by Paul’s son Alexandre in August 1944 when he and the French Resistance stopped a Nazi train containing the loot by dynamiting the tracks up the line.  Others are missing still.  The Matisse story is an engrossing tale.  Missing for nearly 75 years, it was finally recovered in Munich in 2012.

The Rosenberg family had commissioned Christopher Marinello, a lawyer from Art Recovery International to assist them in finding artworks that remained missing.  In 2014, it was found in a collection in the apartment of Cornelius Gurlitt, the collection estimated to be worth over $1 billion and containing many works looted by the Nazi party during the second world war.  Marinello remarked, ‘the painting was found covered in a layer of grime.  There was a milky white film on it as it had been sitting flat, unstretched amongst rotting food.’

Cornelius Gurlitt who died in May 2014, was the son of Hildebrand Gurlitt.  Hildebrand, despite having a Jewish background, was a powerful art dealer commissioned by the Nazis to sell and trade confiscated or cheaply purchased works from Jewish families in the 1930s and 1940s.  The spectacular collection he accumulated contained works regarded as ‘degenerate’ by the Nazis and so gave Gurlitt the opportunity to create the huge collection.

Cornelius, a reclusive man, lived alone in a damp Munich apartment and had a house in Salzburg, both residences being shuttered and poorly maintained.  The many hoarded paintings acquired from his father’s career (1,280 in Munich and 238 in Salzburg) were comforting treasures to Gurlitt, but ‘were often pushed into corners among a mess of waste paper.  Mould grew on some of the surfaces.  The radiance of the paint has been dulled by a filter of dirt.’ (Stephen Evans, BBC News, 26 March 2014).  Gurlitt was too old, alone and ill to care for them properly.

The works were confiscated from Cornelius in February 2012.  He had been stopped and questioned by customs officials when on a train trip from his bank in Switzerland to his home in Germany.  He was carrying approximately $13,500 in cash, which although legal to take from one country to another, had been enough to raise suspicion about where the funds in his bank account had come from (occasional sales of some of the collection).  This triggered a tax investigation and a search of his Munich flat.  The spectacular collection was discovered.

Early in 2014, Cornelius gifted the collection to the Museum of Fine Arts in Bern, Switzerland with instructions that any works of dubious origin be returned to legitimate owners (not all were looted works).  After a ruling from a German court approving the return of paintings, the Matisse was among the first to be given back to families.  The painting was presented to the Rosenbergs on 16 May 2015.

Rosenberg’s granddaughter, Anne Sinclair, said the return of the painting was emotional.  ‘First I feel deeply moved, of course, by the idea that this painting is back in the family 74 years after being looted, and deeply melancholic thinking that my grandfather is not able to see that,’ she says (www.parkwestgallery.com/henri-matisse-painting-looted-by-nazis-returns-home/, 26 May 2015).  Paul Rosenberg died in 1959, but he had spent many years trying to recover the Matisse and many other works such as those by Pablo Picasso and Claude Monet.