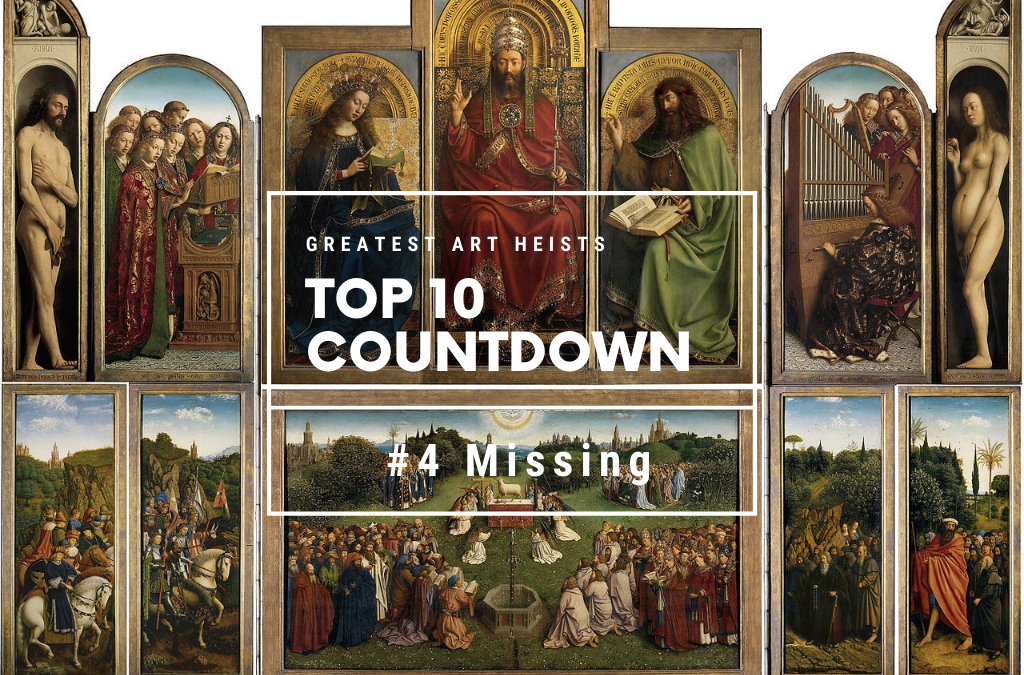 The Ghent Altarpiece is regarded as the most stolen artwork of all time.  ‘Napoleon robbed it, Calvinists nearly burned it, the Nazis were desperate to own it, and part of it has been missing for 80 years.’ theguardian.com

The artwork is regarded as the world’s first major oil painting and consists of twelve painted panels depicting the Christian story.  It was painted largely in the 1420s by the brothers Hubert and Jan van Eyck and reportedly completed in 1432.  The eight side panels can be folded inwards over the centre frames.

When the panels are closed the reverse sides show prophets and Sibyls (oracles) in the half-moon panels at the top.  These look down on other panels showing the annunciation (the angel Gabriel declaring to Mary that she would have a child).  The four panels at the bottom show saints and donors, and are believed to be the last parts of the entire work to be completed.

Unfortunately, the Altarpiece has had a rather turbulent history, with pieces of it having been stolen over its 600-year history, but mostly recovered.  There have been 13 thefts, beginning with a Calvinist mob breaking into the cathedral in 1566 to destroy it.  They discovered it missing due to followers of the church having secreted it away for its protection.

The latest theft occurred during the night of 10 April 1934.  The panel depicting The Just Judges was carefully cut from the frame and included the reverse panel showing a sculpture-like (grisaille) image of St John the Baptist; the other panels were untouched.

On 30 April of that year, a ransom was demanded for 1,000,000 Belgian francs (roughly $41,000 AUD, a large sum at the time) in a letter received by the Catholic bishop of Ghent.  A lengthy negotiation began and at one stage, included the return of the panel of St John the Baptist as a show of good faith.  It had been split from the back of ‘The Just Judges’ panel.

Several letters were exchanged between the thieves and authorities, but no ransom was paid and the painted panel ultimately was not recovered.

Many believe that the culprit was Belgian Arsene Goedertier, a stockbroker, who claimed on his deathbed that he had stolen it.  He was very involved in the social life of the church, but it is difficult to establish his motive.  He was not short of money and he lacked the physical capability to execute the theft.  Late in 1934, Goedetier became very ill and on 25 November just as he was dying, he said he was the only person who knew where it was hidden.  Copies of the 12 ransom letters were found in his home, but he did not reveal its whereabouts.

The artwork is now presumed to have been destroyed, although there is still a member of the Ghent police department officially assigned to finding it.  There are several researchers still looking for it too, following up clues and looking into new theories on where it might be.

The panel itself was replaced in 1945 in the cathedral by an expert Belgian copy artist Jef Van der Veken.  He was so good at reproductions, he was known to also indulge in art forgery on the side.