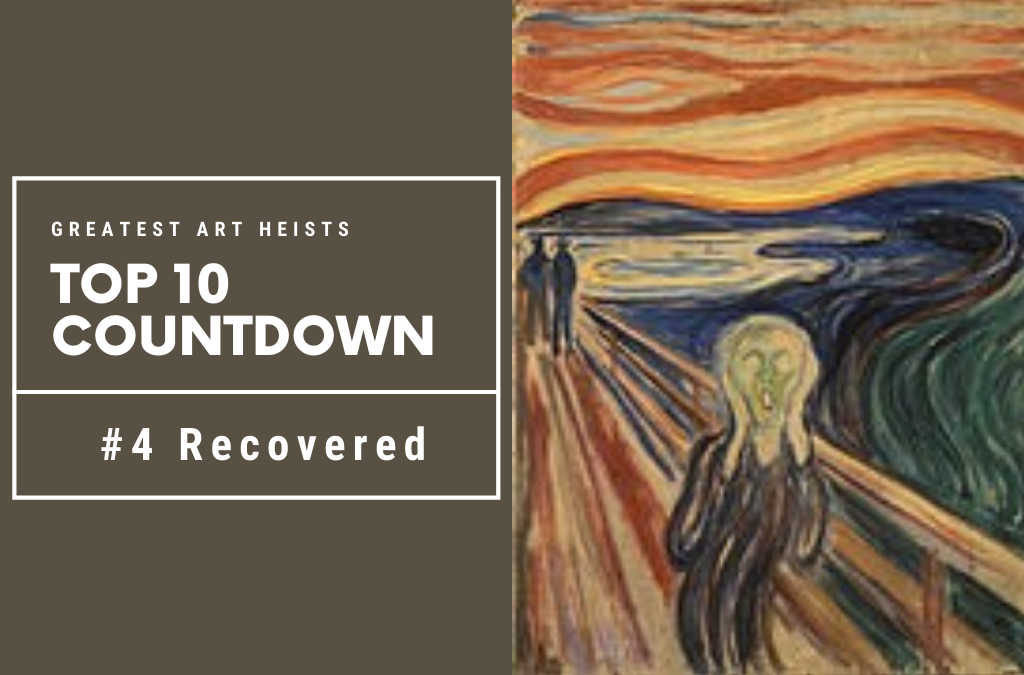 Edvard Munch painted and drew four versions of his famous artwork ‘The Scream’.  Two versions have been stolen, one in 1994 from the National Museum in Oslo, and another from the Munch Museum also in Oslo in 2004.

These paintings have often been reflected in popular culture, in movies, cartoons, television, in other modern art compositions and even as an emoji showing a face screaming in fear.

Prior to the Olympic Games in 1994, preparations were made by staff at the National Museum in Oslo for the extra visitor numbers expected in the city due to the world sporting event.  The museum housed one version of the famous painting by Norwegian artist Edvard Munch called ‘The Scream’.  They wanted to highlight this as part an exhibition of Norwegian culture on display during the Olympics.  It was moved from its usual location to the ground floor.

The opening ceremony of the Olympic Games was ready to start on 12 February.  At 6:30 am that day alarm bells rang at the museum and the police were called straight away.  They arrived minutes later to find a ladder leaning up against a smashed ground floor window and ‘The Scream’ cut from the wall with wire cutters.  A note was left saying ‘Thanks for the poor security.’

The heist had taken 50 seconds and two thieves had been captured on CCTV cameras climbing up and down the ladder before getting away with the painting.

Authorities could not understand why anyone would steal ‘The Scream’ since it is so well-known and as with artworks of that calibre, would be impossible to sell illegitimately despite being worth many millions at a legal auction.  They could only imagine that it had been done as some sort of publicity stunt, particularly with the world’s eyes on the city during the Olympic Games.

Only one month after the theft, the National Gallery received a ransom demand.  The thieves wanted $1m USD for its safe return.  The Gallery refused to pay.

Instead, they asked the Arts and Antiques division of British Scotland Yard to help find and recover the artwork.  They set up a sting operation which comprised elaborate preparations to establish the seemingly genuine identity of a dodgy art dealer, actually British detective Charles Hill, who was interested in buying on behalf of the Getty Museum in Los Angeles.  He and another detective offered the thieves $350,000.  They accepted and arranged to meet in a Norwegian hotel about 60 kms south of Oslo for the exchange on 7 May 1994.

Four men were arrested and in 1996 convicted of stealing the work and attempting to sell stolen property.

The second theft occurred on 22 August 2004 from the Munch Museum.  A daring armed robbery resulted in the loss of Munch’s 1910 version of ‘The Scream’ and another of his paintings, ‘Madonna’.  Numerous visitors witnessed the thieves rip the paintings from the wall.

The Museum closed for ten months to upgrade its security.

Mid 2005, police had four suspects in custody, but the paintings had not been recovered.  It was feared that this time, they had been destroyed.  Early 2006, six men went to trial, variously accused of planning or carrying out the thefts.  Three were sentenced to between four and eight years prison and two of those were ordered to pay the City of Oslo compensation of roughly $164m.  Three others were acquitted.

On 31 August 2006 Norwegian police announced that they had found the paintings.  Not many details were released about how they had achieved this, but there was some damage to both works.  ‘The Scream’ sustained some irreparable moisture damage and ‘Madonna’ had holes in the arms and cuts to the sides of the work.